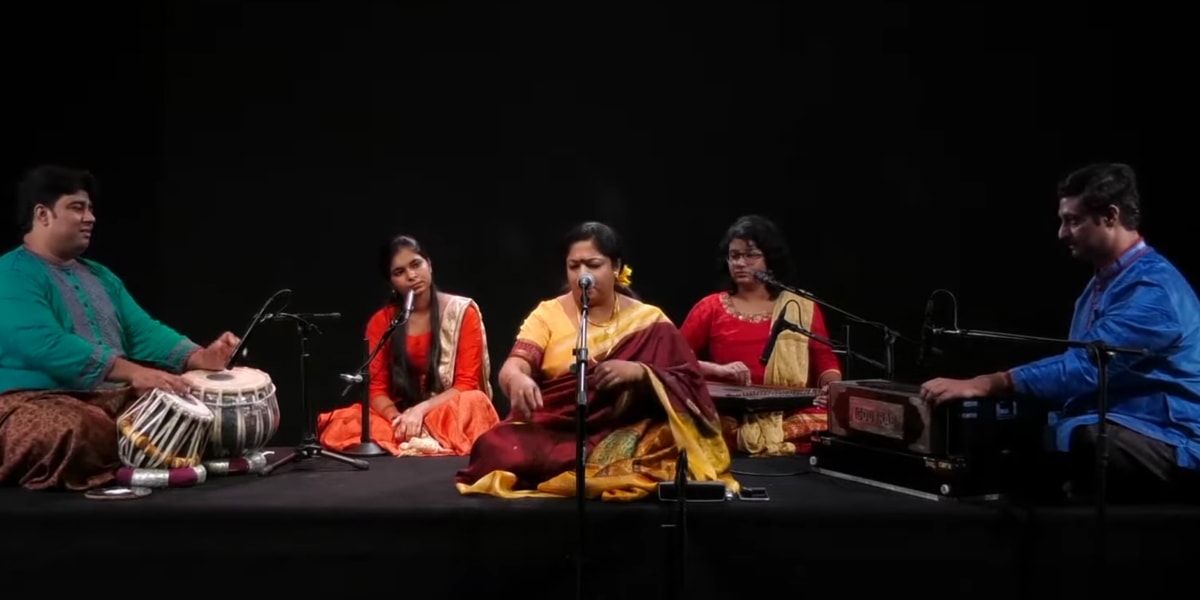 Milap celebrate Holi 2022 with an exclusive studio recording made especially for you! Our concert are designed to help you unwind, escape and lift up your spirits! Here Milap is delighted to present a brand new specially produced concert for Holi with a Live Studio recording from ‘On Air Theatre’ in Kolkata by Internationally renowned vocalist Smt. Shirin Sengupta Nath. Here

Smt. Shirin Sengupta Nath is an internationally acclaimed Hindustani Classical Vocalist from Kolkata, India, having performed in major Music Festivals & venues in more than 25 countries around the globe since last 21 years. She is an “A” Grade Artist of All India Radio and Doordarshan and an ex “A” Grade Scholar of ITC Sangeet Research Academy, Kolkata.

Shirin’s God gifted flair for Classical Music manifested at the age of three itself. Her parents Late Shri Ramani Mohan Nath and Smt. Sunanda Nath, rightly identified her talent and immediately commenced her TAALIM at home. Simultaneously, she was placed under the tutelage of Sri Subhrojyoti Chakraborty. However, her formal training began sometime later under the able guidance and tutelage of PANDIT A.T. KANAN & PANDIT ARUN BHADURI, which continued for the next decade and a half. More recently, since 1996, as a Scholar at the ITC Sangeet Research Academy, she has been under the guidance of her present Guru PADMASHREE PANDIT ULHASH KASHALKAR. She has also learned Light Classical Music under the guidance of LATE SMT. SIPRA BOSE.

Over the years, Shirin has evolved as a musician par excellence and has performed at various Music Fests within the country & around the globe including Musica Sacra International, in Germany, World Music Festival in Italy, Milap in the UK, to name a few She has also performed extensively under the banner of SPIC MACAY in various parts of the country. Shirin has also touched many hearts across the Globe, wherein she has performed in numerous International Music Festivals in the Western and Middle East Shores extensively. However, not restricting herself to live performances, she has rendered her melodious voice to the cine world in DHUSAR PANDULIPI”. Her albums – “KYABAAT”, “CORAL OF LIFE”, and “ANOURAAG” for World Music Audio are notable and highly praiseworthy. Till date, Shirin has more than 25 CDs and DVDs released to her credit, the most recent of them is “PHIRE PAWA”. Notably, all the songs in this CD have been composed, arranged for and directed by none other than her own husband and sarod Maestro Dr Pandit Ranajit Sengupta.

As an expert, she has been in the panel of Judges & Examiners for Rabindra Bharati Univ, Kolkata, Viswabharati Univ, Shantiniketan, Dover Lane Music Competition, State Music Academy and for several other events including at UNIFEST organized by Association of Indian Univ (AIU).

Over the years, Shirin has received numerous accolades from various organizations, which is testimony to her proficiency over Hindustani Classical Music. Among the long list of achievements, some of the notable ones are – she is a topper in graduation & masters from Rabindra Bharati Univ, Kolkata, recipient of CCRT National Scholarship, winner of President’s Award in All India Radio Competition, JADU BHATTA Memorial Award and The Ustad Amir Khan Memorial Award.

Discover and learn more about the instruments you see in this video at ‘Instruments India’, our online archive of sounds, images and videos exploring the details of a variety of Indian instruments: https://www.milapfest.com/instruments…