In March 2023, Milap will present one of India’s most celebrated and undisputed stars of classical music, Bombay Jayashri, as she returns to England for the first time in over a decade… 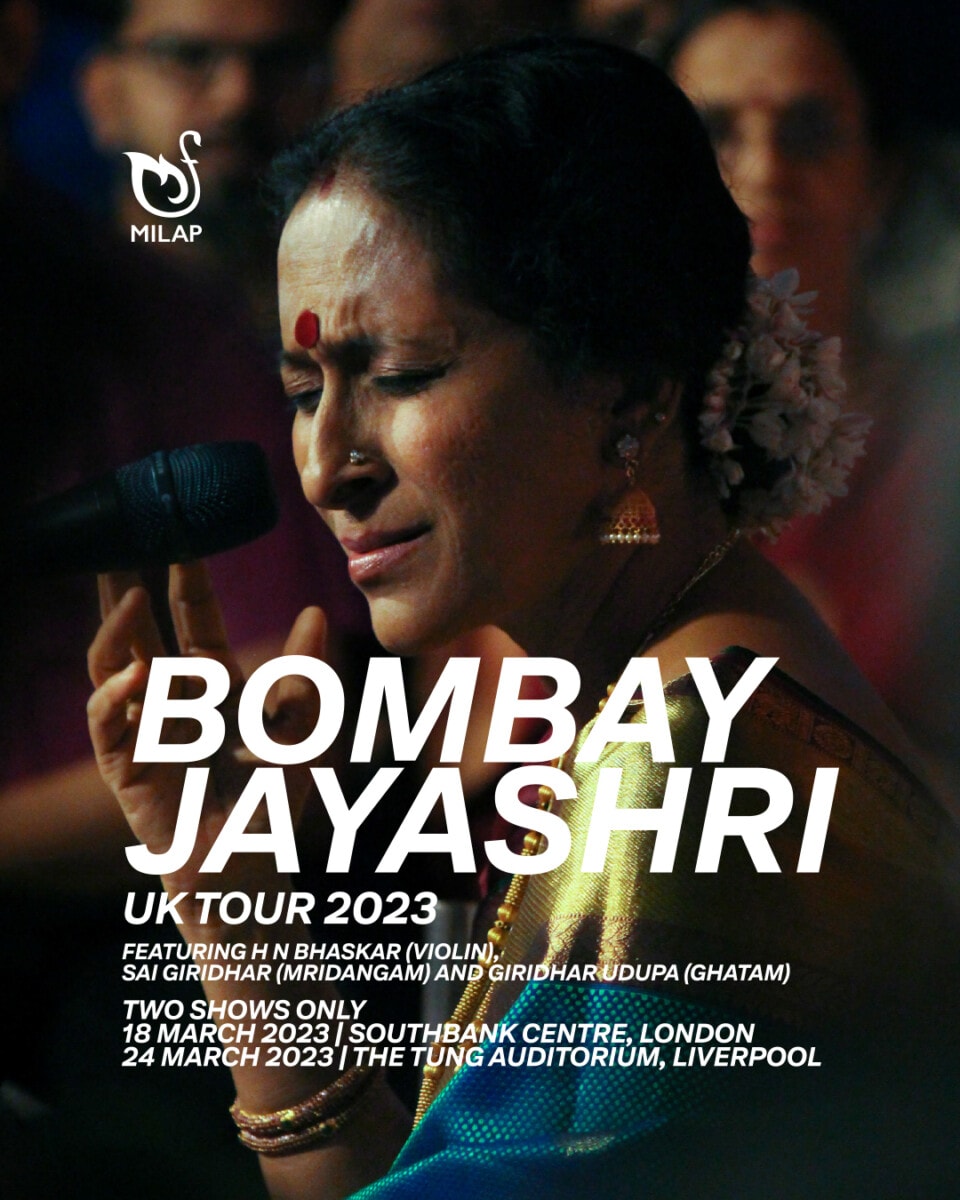 In March 2023, Milap will present one of India’s most celebrated and undisputed stars of classical music, Bombay Jayashri, as she returns to England for the first time in over a decade to perform two very special shows of Carnatic compositions and improvisations.

Having performed her first concert in 1982, Bombay Jayashri is known for her distinctive vocal range and quality, and her incredibly varied repertoire featuring songs from various Indian languages including Tamil, Telugu, Kannada, Malayalam and Hindi. As a frequent headliner at major Indian music festivals, and with a career spanning over three decades, Jayashri’s finely honed voice exudes a hypnotism difficult to resist.

In 2002, Jayashri received a Filmfare Award for Best Female Playback Singer for the song ‘Vaseegara‘. In 2012, she was nominated for an Oscar in the Best Original Song category for ‘Pi’s Lullaby,’ from the film Life of Pi. In 2021, Jayashri was awarded a Padma Shri – India’s fourth highest civilian award.

“The contemplative quality, her expository technique giving space for creativity, her intuitive and melodic approach; all these lend a spiritual tone to Bombay Jayashri’s music.”
The Hindu

In her voyage as a cultural ambassador of India’s rich heritage, Jayashri has appeared extensively throughout the subcontinent and further abroad in the most prestigious venues, drawing critical acclaim wherever she performs. She also has the rare privilege of being the first Carnatic classical vocalist to have graced the stage in some of the world’s finest Opera Houses.

“Bombay Jayashri is an icon of Indian music, and not only has one of those instantly recognisable voices, but also has an aura around her whenever she performs. We have loved working with her in the past, both on stage and as a tutor to our national ensembles; now, we are thrilled to welcome her back to England after a gap of over 10 years.

I’m sure our audiences are going to love hearing her sing live, as well as the brilliant group of musicians who will be appearing alongside her.”
Alok Nayak, CEO & Artistic Director of Milap

Appearing for the first time in the UK in over 10 years, Jayashri will take to the stage in London and Liverpool, where she will perform alongside a stellar ensemble of musicians – H.N. Bhaskar (violin), Sai Giridhar (mridangam) and Giridhar Udupa (ghatam) – all of whom are considered amongst the finest Carnatic musicians.

“…a rare Carnatic vocalist who has transcended the barriers of genres; she is equally at ease singing with a Western Orchestra in Helsinki as she is with Sanskrit shlokas at a concert dedicated to Lord Buddha.”
The Asian Age